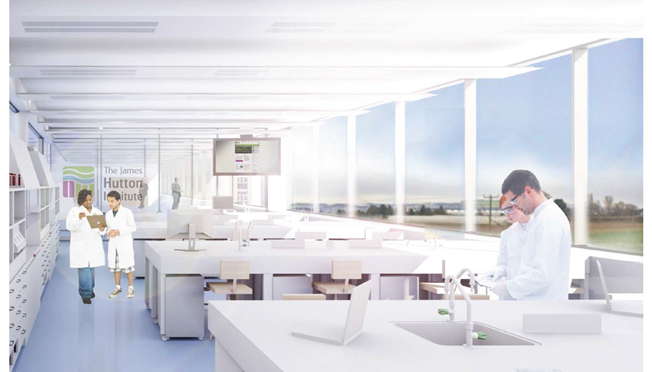 As part of the Tay Cities Deal, the Scottish and UK governments will invest up to £62m in the work of the James Hutton Institute in Invergowrie. This investment will go towards the Institute’s International Barley Hub and the Advanced Plant Growth Centre.

The International Barley Hub is an ambitious development to create a world-leading centre to translate excellence in barley research and innovation into economic, social and environmental benefits.

The Advanced Plant Growth Centre will bring together a unique combination of state-of-the-art facilities that will develop the underpinning science to bring increased commercial, economic and environmental benefits to the agriculture, food and drink sectors.

Professor Derek Stewart, Agri-Food Business Sector Lead at the Institute, tells Invest in Perth about the – literally – ground-breaking work being carried out within these two projects, and why it matters to Scotland and the planet.

Barley is the main crop in Scotland and is grown in the Tayside region. We are world leaders in barley research, and we are now

Barley is the main crop in Scotland and is grown in the Tayside region. We are world leaders in barley research, and we are now to bring companies into the area around this innovation space and

More than the drinks market

Barley is not just about whisky and beer; there is a huge livestock market that’s dependent on it. Scotland is a premier meat provider with an international reputation for quality. Can we make it “premier-plus” by designing, growing and maintaining better barley that will deliver better meat?

Another area, and one that is gaining a lot of credence, is barley as a foodstuff.  Barley is a traditional food for us and has been since Roman times. If you have it at a certain level in foods, it has approved health benefits; it’s very nutritious. Initial studies that we carried out show that if you substitute a percentage of your wheat with barley in bread, you can reduce the salt level, because the barley delivers that savoury taste that you want in bread.

There are other applications for barley in food. In Scotland we grow around 1.8 million tons of barley every year, and this means a lot of straw is generated too. If you’re smart in the way you grind up the straw, and use water or other benign solvents, you can extract effective and sustainable gums and thickeners for the food industry. It can contribute protein, fibre and binding agents, which are crucial for many foods of the future such as the new wave of vegan/vegetarian food that tastes, smells and feels like meat. These extracts can also have non-food uses as adhesives and act as feedstocks for chemicals currently only generated at an industrial scale from fossil fuels.

In this way we can create a circular economy process around the barley sector. The ultimate plan is to ensure that we get the companies that want to do this based in the Tay region, and the IP resting in this region. Having these companies’ headquarters here would mean plenty of high-value and high-skill jobs.

Whereas the Barley Hub is about developing one main crop, the Advanced Plant Growth Centre is an agnostic set of processes that can be applied to a lot of different crops.

One aspect of what we do here is working with companies to look at climate-change resilience. We need to be thinking long-term (multi-generationally) and ensuring that the agricultural business is equipped for change or, even better, ready to grasp the opportunities it offers. The Tay Cities region is a very agricultural region, but we can make it smarter and better.

Some scientists at the James Hutton Institute support the intergovernmental science panels that are helping to create prediction scenarios for climate change. This means looking at the existing crop portfolio and potentially new crops we cannot currently grow. What’s our agriculture going to look like in 30, 50 years? Well, we know for a fact that we won’t be able to grow what we are growing now 30 years from hence. The climate will be different; this means that the crop diseases will have either evolved or will be new, creating new problems. The work at the APGC means we could be ahead of that curve from a global perspective.

We need to be smart about analysing what we are growing. Instead of going in, harvesting the plant, taking it back to the lab, grinding it up and taking extracts, we could do so much more using sensor-based systems. That means we’re not going in among the plants and disturbing them but allowing them to grow naturally. In addition we’d acquire the data more quickly: in fact, constantly and in real time.

Of course, the interest in this is not purely scientific. There will also be commercial applications that polytunnel farmers want to use, so that they can monitor their crops continuously, linked to machine-learning systems. For example, the signal could say, “This drill needs water,” “This part of this drill needs treated for pests,” or “These plants need nutrients”. It’s smart agriculture.

Alongside these two projects receiving funding from the Tay Cities Deal, we will also explore the potential that vertical farming offers. This completely disruptive technology could facilitate growing things from seed right the way through to production and sale, and producing 24/7, 365 days a year. Or it could be growing plantlets and providing them to the local community and/or globally. Currently we import a lot of plantlets, from places such as the Netherlands. That’s an expense that we could save, and we could even start exporting them!

In addition, by growing them under vertical farming systems, we can produce them completely disease-free, or introduce beneficial bugs around the root systems. This means that, when you take them out and plant them in traditional production systems, they’re gung-ho and ready to go. It buffers the stress of leaving the “mother” system and beds them into a comforting, warm system with that blanket around them. These are new ways of regenerating existing products and the technology works seamlessly with existing agricultural production systems in the Tay Cities region.

Vertical farms are based on LED systems and feedback mechanisms. Those technologies can also be used in polytunnels. If, for example, you’re growing raspberries in polytunnels, giving them a different type of light closer to harvest time could completely change the colour, aroma, taste and shelf life of the harvested fruit. Again that re-enshrines that what we produce will be premium.

Bringing the Amazon to Tayside

Our work is not just about food crops. My background is in drug designing for the pharmaceutical industry. A very high percentage of all drugs have natural products as their bases, or they are entirely derived from plant, bacteria or marine sources. So if the next pioneering cancer drug is from a plant found in the Amazonian Rainforest, we can create the Amazonian Rainforest in a vertical farm – and grow it in Tayside! Because we’re linked in with the big Life Sciences effort [in the Tay region], we’ve got at least the first several stages of the supply pipeline there, including the testing stage.

That means we could provide difficult drugs that are costly to obtain, by taking the air miles out of the equation. It also means we avoid problems that could affect the crop, such as frost, drought or flood, because we control the conditions in the vertical farm. That’s a very attractive proposition.

On the other side from the production aspect, we want to look at smart ways to store primary crops, because the supply chain can be very fickle. In April 2018, after the long, harsh winter – the so-called “Beast from the East” – had ended, some vegetable crops produced twice as much in a fortnight as they would’ve done the year before. But wholesalers and retailers weren’t buying them, because they knew what the demand was at that time of year. If we develop smart storage systems, that will allow the producers to spread the gluts, extend the shelf life and give significant produce-supply resilience back to the farmer.

Why Perth & Kinross is best for the James Hutton Institute

Firstly, Perth & Kinross is a very verdant area. Secondly, we are located in a high-tech environment. We’ve got high-end universities very close by in the Tay Cities region – St Andrews, the University of the Highlands and Islands, University of Dundee, Abertay University – and they’re all currently looking at different aspects of what these two projects could do. It’s a concatenation of skills and expertise. So could we be based anywhere else? I don’t think so.

Find out more about the International Barley Hub

Find out more about the Advanced Plant Growth Centre