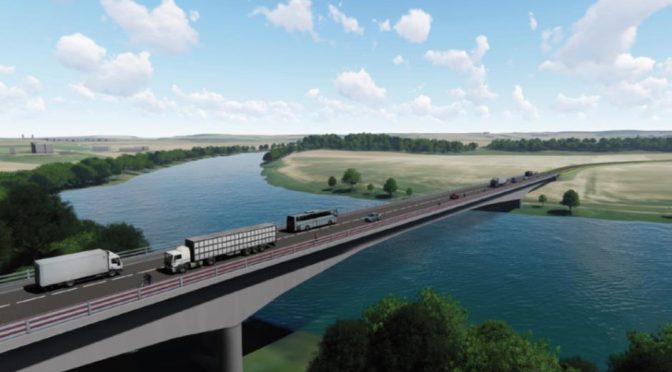 Following the appointment of the Stage 1 contractor, BAM Nuttall, last year, and in accordance with the contract programme, work will begin on localised tree felling and ground clearance along some parts of the proposed link road route during late January through to March. The identified trees will be removed in January and February before the nesting season begins.

The clearing work along with archaeological investigations are part of site preparation for the £118 million Cross Tay Link Road. The Council has applied for Core Path Orders for parts of the route of the road, which are currently under consideration by Scottish Ministers. Access to all of these Core Paths will be maintained during the advance work, with minimal diversions put in place only as far as necessary for the safety for path users during tree felling activity.

The Cross Tay Link Road will create a new bridge over the River Tay just north of the Inveralmond Roundabout and a six kilometre stretch of new road linking the A9 and the A94 just north of Scone. One of the highlights of the development will be a new green bridge to connect the ecology on either side of the Cross Tay Link Road, at Highfield Plantation Woodland on the Scone side of the river.

This significant investment will unlock key development land to the north of the city as well as redirecting unnecessary traffic from the city centre. Reducing congestion and related pollution within the city.

Councillor Murray Lyle, Leader of Perth & Kinross Council, said: “The Cross Tay Link Road is an important part of delivering on our ambitions for Perth city and the wider region. On completion it will deliver major benefits for residents through reduced pollution and carbon output and will allow us to make active travel and environmental improvements to the city centre to support residents and visitors alike.”

Engineering and construction group BAM Nuttall will be delivering the new road, with the main construction beginning in Summer 2022. Meet the contractor events are currently being planned to give opportunities for local businesses within this major project. These are likely to take place this Spring.

BAM Nuttall’s Project Director, William Diver, said: “This first stage of preparation marks the start of a major project to deliver infrastructure that will significantly improve traffic flows in Perthshire.”

More information about the Cross Tay Link Road, which is due for completion in 2024, can be found at perthtransportfutures.