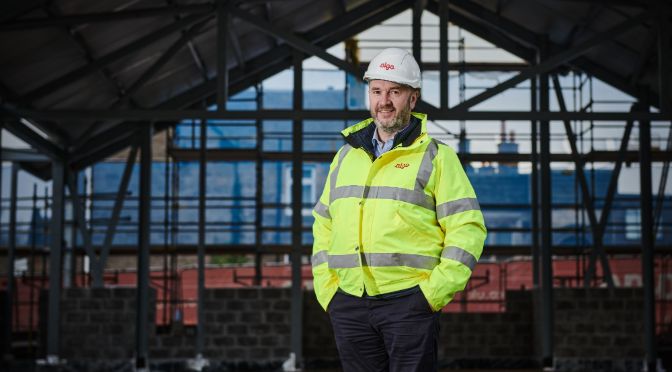 Murray Alexander is the Managing Director of Perth based Algo Ltd, a multimillion-pound turnover business that has grown from its humble roots in agricultural buildings to become one of Scotland’s longest-standing independent construction companies.

Established in the early ‘80s by Murray’s father, Peter, Algo has evolved and matured through hard work, consistently high standards and the foresight to evolve and diversify in order to satisfy the growing demands of commercial building in Scotland.

One of the few medium-sized construction firms remaining in Scotland, Algo’s projects range from turnkey solutions for local companies, to larger builds across the country.

Murray has been at the helm for the past 12 years, and spent almost another 20 before that building his reputation and developing the knowledge and expertise that has carried Algo into the 21st century. He led the team responsible for the build of Algo Business Centre, the company’s first foray into serviced office lets.

Since then, Algo has taken ownership of Inveralmond Business Centre as well as winning the contract to design and build King James VI Business Centre for the Castlecroft group in 2015 with the launch of Alfa Doors Ltd who specialise in the construction and supply of quality, bespoke industrial doors to other builders as well as manufacturing for Algo projects.

Murray’s own business portfolio extends to Alexander & Co, a residential-house-building company that he owns in partnership with Sandy Farmer, his second in command at Algo. He and his wife, Nadia, also own the Lia & Olive Beauty Salon brand, the exclusive Holland Cooper retail franchise for Scotland. Alexander Residence and Tay Apartments, a small suite of luxury self-catering apartments in Perth city centre, also form part of the business portfolio.

IiP: Economic changes over the past decade have resulted in many established Scottish and UK construction firms going under. Why do you think Algo has survived?
MA: I can’t speak for others, and what they may or may not have done, but for us it has to be centred around our depth of knowledge and expertise. It’s a simple fact that the longer you’ve been at something, the better you become at it, and we’ve been doing this for almost 40 years – that in itself instils confidence in clients.
Everyone in Algo’s senior management structure, both office and site based, has been with the company for between 10 and 20 years. And a couple of us even longer than that. The newer team coming up through the ranks are learning from this experience, not just the practical skills but the ethos behind who we are and what we stand for.

This has meant that we’ve been in a position to remain true to our promise of delivering great quality buildings, on time and on budget. It gives us consistency – and customers like that. I think having our base in Perth has contributed to that message. We’re here – people can see us. We don’t just turn up for the build and disappear.

That same experience means we’re good at business as well as building and so we’ve been quick to seize opportunities that have presented themselves to us. The business centres are a great example of that; as is Alfa Doors. We take educated risks that have allowed us to steadily increase turnover without the need to compromise on standards.

IiP: You’ve mentioned the depth of knowledge in your team. How do you future-proof this expertise?
We currently have around 90 employees covering all areas of the business – so that means office-based professionals, skilled trades on-site, and in-house design technicians. Making sure that everyone stays motivated and looking in the same direction is tough but it comes back to that passing on of skills and attitude.

You need to be proactive about it too; we are actively engaging with local schools to offer opportunities to young people considering a career in construction. We bring them in as new starts, and train them to our standards. It means we’re actively nurturing the next generation of builders, designers and managers, and ensuring we have the people to take us into the next 40 years of Algo.

IiP: You’ve been in the construction business for almost 40 years. What has changed, and how do you ensure Algo remains relevant?
In reality, people still want a cost-effective solution, so that never changes. But I do think expectations have increased as budgets have dropped, meaning the entire industry is more price driven than ever before.

Over time this has led to a significant increase in detail when tendering and quoting for work, and in reporting – so contractually we have more to do for every job. For a company like Algo, that works in our favour because we’ve always been mindful of working smart, ensuring high standards and providing value.

We recently appointed a senior projects manager to assist the whole team, and better link the office to our various sites. On the surface it’s a small change, but it’s been a lot of small changes like this over a number of years that have kept us moving forward and looking towards the future.

Change both large and small has kept us versatile in our approach to how we do business. In 1990 we only built agricultural buildings, most of them in Perthshire. Today we build churches, distilleries and industrial units from Inverness to the Borders. By adapting, we’ve remained relevant.

IiP: So what does Algo’s business look like today? And how have you positioned yourself for growth?
In some respects it’s more of the same; but for us that means taking those calculated risks. We’ve spread ourselves geographically, and now have projects running as far south as the Borders and as far north as Inverness. This is where I see our long-term growth; as a nationally recognised construction firm with strong brand awareness across the country.

That’s one of the reasons we’ve stayed in Perth and why we’ve planned to expand our base right here. We are central to the whole of Scotland, which means logistically, we’re about as competitive as you can get. I couldn’t think of a better location to be in.

And of course, we see first-hand the growth that is happening locally. Right at this minute we have £6 million of projects going on in Perth. That speaks volumes for the local economy because it means that people want to invest. When you take that full circle, it tells me that we’re in exactly the right location for growth.

For me, I don’t want to chase turnover for the sake of it. It has to be structured growth, into the right markets that we can service long-term and deliver quality products to. The further afield you go, the harder that becomes so you need to be ready, and have total belief in your product and people. Thankfully, years of experience have given me both.

IiP: You mentioned expanding your base – what plans do you have for the immediate future?
Last year we bought three acres of ground at Broxden in Perth and we’re now looking to progress that project. We’ve created five separate plots of varying size, one of which we’ll keep and the others we’ll sell to local businesses looking to expand or to companies hoping to relocate to Perth. The idea being of course, that they’ll also choose Algo to develop their ground in accordance with their plans!

Our plot is being developed into a third business centre. We have 64 businesses renting serviced office space from us at the minute and we know through these existing tenants and new enquiries what people want their office space to look like in the 21st century.

It’s all about how people work, and what their lifestyle needs are in accordance with that work. The new centre will have flexible, open spaces as well as traditional offices, and there will be a focus around health and wellbeing integrated within the plans – for example, we have ambitions for our new centre to house a gym and a health café, and ideally, a nursery.

It is a huge multimillion-pound project with many different facets to it. And that’s what’s so exciting about it – it brings together all of our skills, unifying that diverse range of expertise our team has built up over the past four decades.

To find out more about Algo Ltd, visit their website algo.co.uk. For office space and Broxden Development enquiries contact the office on: 01738 450450.