The Rise of Ballintaggart Farm 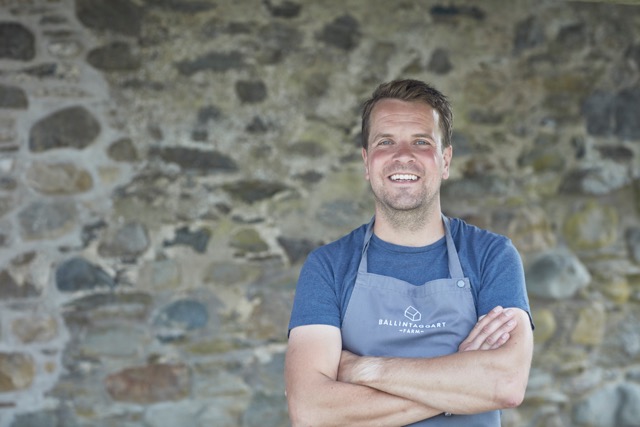 Do chef’s fear the clean glaze of an empty plate? Some, perhaps. In the same way that writers allegedly fear the screaming void of a blank sheet of paper. But not Chris Rowley and his wife Rachel and brother Andrew.

Blank plates are inspiring: their most pressing worry when they opened a destination restaurant in Highland Perthshire, in September 2016, was a booking list that was completely blank.

Chris and Rachel had originally generated a reputation for hospitality when running Edinburgh’s first at-home supper club. At that time, it was an amateur side line for the couple, who both had busy careers. But flush with the success of ‘Charlie and Evelyn’s Table’ (named after his grandparents), Chris decided to leave his job in financial services in 2013, accepting an invitation to cook with The Gardner’s Cottage, already a star in Edinburgh’s culinary spotlight.

From there, Chris took his inspiration for fresh, local, seasonal produce and went on to the Leith School of Food and Wine in London, where he earned his professional stripes and the accolade as Laurent-Perrier’s best all round graduate 2015.

Chris went on to work in London as a private chef, and also found opportunities to work with Rick Stein and Nathan Outlaw.

But when Chris and Rachel started a family, they decided the time was right to leave London and establish their own restaurant. Somewhere they could create deceptively simple, yet mouth-watering dishes, which Chris was already renowned for – and explore the best in food, wine and hospitality.

“We saw Ballintaggart Farm advertised and came straight up for a viewing. It – and Highland Perthshire – captured our hearts and imagination at first sight,” explains Chris.

The buildings had already been converted into a home, so they didn’t have to face a conversion – ideal as the couple already had two young children and another baby on the way. But as a converted farm house, there was zero existing business.

“We were starting from scratch in September 2016.”

The stage was set, with two guest bedrooms – both enjoying stunning views of the local countryside – a ‘Library’ that could seat 10 for dinner, and a kitchen garden in the making. “In London, we had a small flat with a window box, but we quickly learned that deer fencing was an essential starting point for this garden.”

From launch, the kitchen was always intended to be the heart of the business – and there was room to manoeuvre. “The fact that we had a young family, and my background in financial services, meant that we were determined to play it safe and play to our strengths.

“We would test ideas that needed no capital outlay. So we launched 2-hour pre-dinner master classes and introduced a cook school that could take eight pupils on a Saturday. It was very popular, with locals and also with people travelling from Edinburgh and Glasgow, as we had our guest rooms.

“Then we launched a feast night in our barn, which can seat 45 for a communal seasonal feast. That’s been a great success, and we now host a feast every month. There’s also outside catering, mainly for other local businesses, but also for private bookings, and that took off quickly as well.”

This year, Chris and Rachel will have welcomed around one-third of their guests from London. “Many travel up on the sleeper from Euston. We can meet them off the train at Pitlochry and transfer them to the Farm. They are here in time for breakfast and can then enjoy a day on the hills before dinner.”

In fact, business has been so good that another nearby cottage has been converted over the summer, creating a further two bedrooms. And the business is set to expand again. “We have been so lucky, as Grandtully Hotel, which is less than a mile from this property, came on the market this year.”

Chris and Rachel are now transforming the 8-bedroom hotel, along with Chris’ brother, who will run it, and who has worked in hospitality for many years.

“Being so close means that some guests can stay at Grandtully and come to dine with us one evening, or at the monthly Feast. We hope the hotel will eventually employ 16 people.

“We already employ five chefs here,” says Chris, “and they look after the kitchen garden too, where we now grow about a quarter of our salad and vegetables. It’s part of the sell when we recruit. We are incredibly fortunate with the local larder here, and source all our meat, fish and poultry from local farms. Everything we serve is local, seasonal and fresh today.

“There’s no doubt our entry in The Sunday Times, and our award as the ‘Most Hospitable B&B’ in the Scottish Thistle Regional Awards helped us get established quickly; but for us Highland Perthshire has always been part of the real attraction. The quality of life here is fantastic, especially for kids, and there are lots of families like us, with young children and their own businesses. It’s also great for connectivity. Attracting chefs is easier when they discover Edinburgh and Glasgow are less than an hour by road, and London is a direct train ride from Pitlochry.

“For us, it’s always been about building a long-term home here, and a reputation for a high-quality product that is backed by personal attention to detail and standards that are maintained day after day.”

It’s clear that in balancing those three ingredients, Ballintaggart Farm has found a recipe for success.

Chris, Rachel and received advice and support from Perth & Kinross Council, Business Gateway, VisitScotland and Scotland Food & Drink. “It’s important to have that support when navigating a new business in a new place.”

To discuss your own ideas for a business in Perthshire contact investinperth@pkc.gov.uk

Perth boasts a skilled and motivated workforce with an ongoing pipeline of talent coming from the centrally based Perth College UHI.

Perth’s unrivalled location and infrastructure seamlessly connects the city with wider Scotland and the UK via road, rail and nearby air.

Perth & Kinross Council's Economic Development Team is focussed on ensuring businesses in the area can access all channels of support open to them. Crucially, our aim is to help sustain businesses in order that we emerge from this as robustly as possible.

As you begin to scrutinise the financial resilience and resource contingency of your business we would like to assure you of our continued support. For more information visit our Covid-19 Support pages >>>