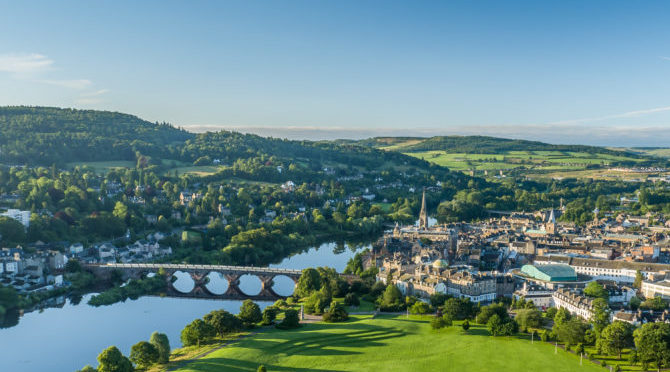 Nicola Sturgeon has announced additional funding for a new bridge over the River Tay and road improvement works as part of the Tay Cities Deal.
The Cross Tay Link Road project, which will see the A9 linked with the A93 and A94 north of Scone, will receive £40 million in investment in an aim to reduce traffic congestion and improve air quality, as well as to open up sites for housing and economic development.

Alongside this project, an extra £10m will be put towards a new industrial investment programme which will support manufacturing and innovation across the region, including in Perth, Dundee, Angus and the north of Fife.

The First Minister said: “Our further £50m investment in the Tay Cities region will support transport infrastructure and manufacturing projects, benefiting people and businesses and ensuring the area continues to grow and thrive. As well as opening up land for new housing and employment sites, the Cross Tay Link Road will reduce traffic congestion in and around Perth and improve the air quality in the city centre and Bridgend.”

“The £10m industrial investment programme will help drive forward our ambitions to be a global manufacturing leader, creating opportunities for businesses right across the region.

“I am confident the Scottish Government’s overall investment in the Tay Cities region will improve people’s quality of life and encourage sustainable economic growth in the Tay area and Scotland as a whole.”

These additional funding pledges mean the Scottish Government is now committing £200m to the deal, while the UK Government will provide £150m – the amount initially agreed by the two administrations.

Perth & Kinross Council leader Murray Lyle welcomed the announcement, which he said “supports the exciting expansion” of the area. “As well as being a multimillion-pound infrastructure project in itself, the road will support the growing population in the area to live life well and expand opportunities for inward investment and better connectivity across Scotland.”

“This will, in turn, boost opportunities for strategic partnerships with businesses, contribute to the local, national and global economy and create prosperous communities.”

The Tay Cities Region Deal is worth £700m in total, with pledges from the governments as well as regional partners in the private sector. It commits both governments to work collaboratively with public, private and voluntary organisations in the council areas of Angus, Dundee, Fife and Perth & Kinross to deliver a smarter and fairer region.