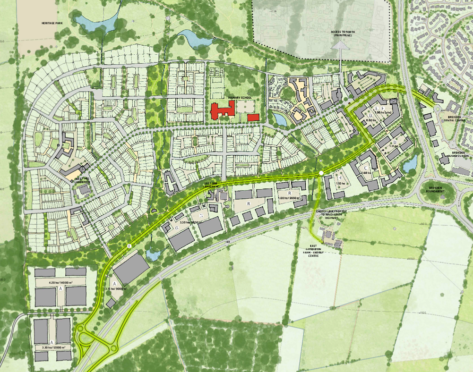 Tayside’s economy would receive a £500 million boost from an eco-innovation business park in Perth, developers claim.

The Perth West project proposes a new exit from the A9 Perth to Stirling road into an “innovation highway” of electrical, heat and data infrastructure alongside office, industrial, retail, hotel, leisure space, an academic centre and mixed housing.

The site will host a hydrogen refuelling station as well as test locations for self-driving cars.

It has been claimed the project will provide around 1,000 jobs and its developers say it will contribute around £20 million a year to Tayside’s economy for 25 years once it is completed.

The John Dewar Lamberkin Trust, who are behind the project, has offered up to £5 million of matched funding through the Tay Cities Deal to support the necessary investment in the infrastructure to realise these goals.

Alexander Dewar, of the Trust, said: “The Scottish and UK governments are clearly committed to ‘smart’ cities and the reduction of greenhouse gas emissions. The Perth West development framework envisages how integrated energy, transport and data systems will work together.

“I believe this makes Perth West unique within Scotland, if not the UK, in terms of delivering a living lab to innovate city infrastructure to support the transition to a low carbon economy. The project has the potential to be a game changer, by bridging the gap between policy and business and responds to strong market sector demand.”

Mr Dewar believes that Perth is “ideally located” to play host to such a development as the city’s population of 50,000 is expected to grow by 24% by 2037.

The project’s developers say low-carbon heat provision will be supplied by an on-site  heat and power station, part-fired with biomass.

Perth West also plans to develop a communications infrastructure, including a high-capacity fibre network, platform and hosting capacity for new energy, transport and data services, plus the potential for artificial intelligence and 5G wireless networks.

Perth West will be championed by the Scottish Cities Alliance at an investment event in Germany this week as an example of how the UK is driving original solutions to meet the needs of businesses.

Nick Skelton, of Peter Brett Associates, development consultants of Perth West, said: “Once fully up and running, Perth West will add an estimated £20m per annum to Tayside’s economy.”

Pete Wishart, MP for Perth and North Perthshire, describing the project as a “significant” investment for the city.

“This could be a transformative project,” he said.

“It is dependent on the Tay Cities Deal but I hope it comes to fruition as it will enhance the Perth city area.”

There will be further public consultation as the design process develops.