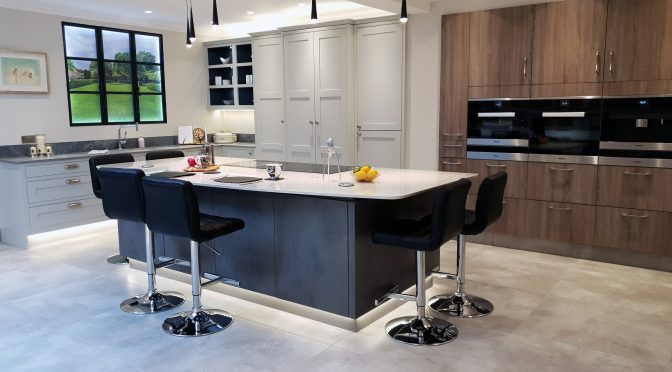 Founder and managing director Lawrence Haddow explained to Invest in Perth where it all started, along with the secret of their success – and why he and his team will soon be floating down a canal in nine bathtubs!

From apprentice to entrepreneur

In 1976, having served an apprenticeship with Perth construction company A&J Stephen, Lawrence went into partnership with his father as a plumber. After a year or so, Lawrence was keen to expand the business and employ tradesmen, so they parted amicably and Lawrence spent 10 years building the business as well as delving into property development.“Eventually,” he recalls, “I made enough money to open this bathroom shop in 1993. That was truly difficult! We had to find double our original budget on fitting it out. Also, although we put in opulent décor, I wasn’t on top of the upmarket bathrooms. When we realised that the middle- to end of the market was the place to be, we transformed and expanded the showroom, developed a car park and new warehousing facilities, and it took off from there.”

From father to son

Meanwhile, the plumbing side of things was also proving successful, and Lawrence realised he needed a manager to run it. In stepped Lawrence’s son, Mark, who’d served his time as an apprentice with L W Haddow Plumbing and Heating. Mark still manages the company  has seen it grow from the early days of having 6 plumbers to employing around 20 plumbers and electricians.

One of the qualities of a successful entrepreneur is the ability to spot opportunities. In 2017 Lawrence realised there was a gap in the market for a company offering bathrooms that were less expensive and design-led but which were still installed with the same care and attention as their luxury counterparts. Haddow Bathrooms was born and went from a standing start to installing two bathrooms a week on average, with turnover of around £500K by the first year-end.

The addition of Perthshire Biofuels means that they can instal and maintain biomass boilers for domestic customers who might not have access to the national gas grid, as well as for business customers such as the Forestry Commission.

What was the next step for the group? “In 2017 we opened up a new Edinburgh showroom for bathrooms and kitchens; that’s when Kitchens2 was born. They’re located in a luxury 4000ft2 showroom in Edinburgh’s Murrayfield area, which makes it very accessible. And I’m delighted to say we have just this month opened up a second Kitchens2 in our Perth showroom on Leonard Street.”

So what’s the secret of Haddow Group’s continuing success? There are several factors at play, but the most important, says Lawrence, is the ability to look after clients. “I love the interaction with my clients,” he says. “I enjoy working with them on the design to take a room or a house from a basic state to something stunning. It’s about reading and understanding what the client wants rather than trying to impose that on them.”

Communication, care and expertise are key to their excellent client relations. “Every morning, we call or text the client to say what time our team will arrive, so they can get the family organised for work, school, etc. We protect clients’ carpets and stairwells as if they’re our own, and we leave the house in good shape every night when we leave. It’s simple but effective.” In addition, all of the group’s businesses employ their own installation staff in Perth and Edinburgh. “That allows us to control quality and service. Lastly, we bring our expertise, from the engine room all the way up, that takes years to get together.”

Given that Lawrence and Mark both started as apprentices, how important is it for them to continue taking on apprentices?

“It’s critical,” Lawrence says. “Many companies don’t employ apprentices as it’s hard work to train them, but we firmly believe that that’s the best way to learn the trades and that we have a responsibility to bring on the next generation. We have two trainee architects and it’s fantastic to be able to develop their work experience. There are young apprentices in the fitting team who start at aged 16 and, in a few years, they’re qualified young men with a trade. We have guys that started here as apprentices and still work with us 25 years later. All of that’s great.”

What does Lawrence appreciate about being based in Perth? “The mix of people that live in Perth and Perthshire works well for us, both in terms of skilled, hard-working employees and a great marketplace of customers. We are also in a good position in the heart of Scotland. Our potential audience in a one- or two-hour radius is huge. We get customers from Glasgow, Inverness and beyond. Because we’ve been here for 25 years, people like our heritage and will travel for it.”

The Future for Haddow Group

It’s not all about work for Lawrence, who believes passionately in giving back to those who are less fortunate. In 2014 Lawrence and a team comprising staff from The Bathroom Company as well as from their marketing agency Fraktul, carried a bath right up to the top of Ben Nevis, raising £4,000 for Macmillan Cancer Support. This year, they plan to sail ninebaths 50 miles along the Forth & Clyde and Union canals between Edinburgh and Glasgow, to raise funds for a mental health charity.

In the business, as well as taking the wraps off the new Kitchens2 in Perth, Lawrence and the team are working on an exciting project. Customers will be able to use Virtual Reality glasses to “see” in 4D around their new bathroom or kitchen, adding and swapping the fittings, lights, wall coverings and floorings – even filling the bath with water – until they find just the right combination. “That,” says Lawrence, “will allow us to showcase a huge array of brands and products without having to keep a warehouse full of stock.”

It sounds like an exciting and bright “vision” for this forward-thinking group of companies.

Perth & Kinross Council's Economic Development Team is focussed on ensuring businesses in the area can access all channels of support open to them. Crucially, our aim is to help sustain businesses in order that we emerge from this as robustly as possible.

As you begin to scrutinise the financial resilience and resource contingency of your business we would like to assure you of our continued support. For more information visit our Covid-19 Support pages >>>