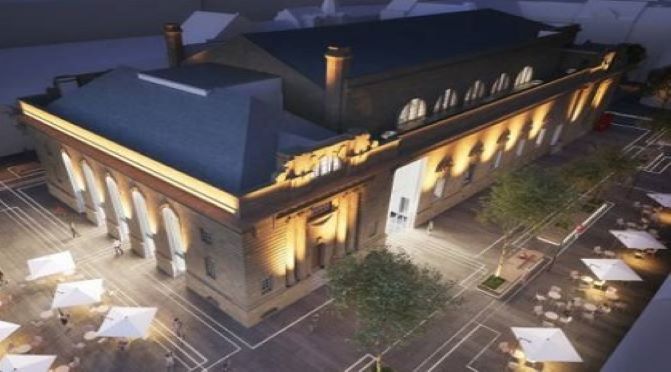 The Stone of Destiny, one of Scotland’s most iconic historical objects, is to become the centrepiece of Perth’s new £26.5 million museum at City Hall.

The Stone of Destiny is to be moved to Perth from Edinburgh Castle, where it has been housed since 1996. The news has been widely welcomed as The Stone of Destiny’s return to the Perth & Kinross region is expected to bring hundreds of thousands of visitors to the area, creating a significant boost for its tourism sector.

The story of The Stone of Destiny will be brought to life using cutting edge technology in a stunning, custom designed exhibition space. It will be free for all to see is expected to play a vital role in the renewal of tourism in the city and the wider region, providing a welcome boost to Scotland’s tourist offering. Construction work on the new museum at City Hall is due to start in February and the museum is scheduled to open in 2024.

Welcoming the announcement, Councillor Murray Lyle, Leader of the Council, said: “I’m hugely proud and excited that The Stone of Destiny will be moving to Perth. Our new £26.5million, world-class museum is the perfect place to display this historically significant object, which represents both Perth’s history as the original capital of Scotland and our future as a vibrant new city. Perth has a growing population and ambition – a place to live life well, where culture and heritage is accessible to all. As the centrepiece of our nationally recognised collection, The Stone of Destiny is a game-changer, firmly establishing Perth as the place to be.”

Made from Old Red Sandstone, geological testing shows The Stone of Destiny was quarried at Scone, just outside Perth, and used for early Scottish Kingship ceremonies until it was taken by King Edward I to Westminster Abbey in 1296. It is still used to crown British monarchs.

The Stone of Destiny and the new museum are central to the story of Perth & Kinross’s renewal after the Coronavirus pandemic. When it was built in the early 20th century, City Hall was a gathering place for the people of Perth and Scotland for generations and will now re-take its original place at the beating heart of the city. The space will showcase more than 10,000 objects and will tell how ancient Scotland emerged from the Kingdom of Alba and the preceding realms of the Picts, Scots and Gaels, highlighting the crucial part that Perth played in the shaping of Scotland.

Perth & Kinross Council has worked for seven years, together with the local business and wider community, to secure the move of The Stone of Destiny to Perth.

The Commissioners for the Safeguarding of the Regalia, who are responsible for the The Stone of Destiny on behalf of Her Majesty the Queen, held a public engagement exercise in Autumn 2019. Members of the public are understood to have indicated their overwhelming support for its move to Perth.

Depute Leader of the SNP group at the Council Councillor Andrew Parrott added: “This is fantastic news for Perth and for Scotland. In returning to its original home in Perthshire, The Stone of Destiny will bring to life Scotland’s story for more people than ever before, inspiring our communities and drawing in visitors from around the world.”

Perth & Kinross Council Chief Executive Karen Reid, said: “This is the best news we could have hoped for and is transformative for Perth & Kinross. As we begin to emerge from the Coronavirus crisis, the news of the return of The Stone of Destiny to Perthshire will kickstart the tourism sector in Perth and the wider region, boosting the local economy, supporting our growing creative sector and sharing the area’s remarkable story with the world.

“This is Perth’s time, and I’m thrilled that from 2024, thousands more people will be able to access the Stone for free, right here in Perth. We have the expertise, the capacity and, above all, the enthusiasm to showcase this remarkable object, for everyone.”

Culture Secretary Fiona Hyslop said: “The Stone of Destiny forms an important part of the story of Scotland. As we look to the future, it will now also play an important role in helping the city of Perth and the surrounding area to further develop as an attractive visitor destination.

“I am grateful to Historic Environment Scotland which has cared for the Stone since its return to Scotland in 1996 and will continue to assist with the ongoing conservation following the relocation.

“As the centrepiece of new £26.5 million museum at City Hall, the Stone will be on display for everyone to see and appreciate. It is truly fitting that, after all this time and the tireless efforts of so many, it will return home.

Perth & Kinross Council welcomes the fact that we will be working in partnership with Historic Environment Scotland to plan the future conservation, care and interpretation of The Stone of Destiny which retains its status as a major Scottish and UK cultural object.

Perth City Hall is a Tay Cities Deal project, which is part of a wider vision to create a cultural and creative industry corridor along the River Tay, bringing new jobs and economic benefit to the region. The Perth City Hall project will create 19 jobs in City Hall alone, with an additional 37 jobs in construction. There will be an annual visitor GVA at £2.5million.

A total of £26.5 million will be invested in the project, including improvement of the surrounding civic spaces.