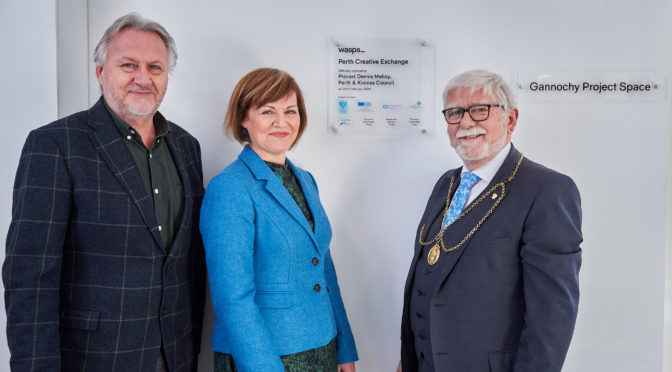 Perth Creative Exchange, a £4.5 million creative hub which will help boost the local Perthshire arts economy, was officially opened at a launch ceremony on Wednesday February 26, by the Provost of Perth and Kinross, Dennis Melloy.

The Provost unveiled a plaque to commemorate the success of this partnership regeneration project by Wasps Artists’ Studios and Perth & Kinross Council, in transforming an empty school building – the former St John’s Primary School – into a facility of high quality, affordable studios for artists, makers and creative businesses. It houses The Famous Grouse Ideas Centre for creative business incubation, a facility which was part funded by the Scottish Cities Alliance’s 8th City Programme, funded through the European Union’s ERDF Strategic Intervention. As well as a significant contribution from Edrington (The Famous Grouse).

The event also saw the opening of Fair Exchange, the first exhibition in the building’s new gallery, The Gannochy Project Space, which features work by some of the Perth tenants. The exhibition continues until Saturday 28th March.

Provost Dennis Melloy said: “I am delighted to see the Perth Creative Exchange facility come into being, made possible by a £3.5 million investment by Perth & Kinross Council.”

We are creating an environment which encourages creative and artistic growth, whilst retaining and attracting talent to the City of Perth. Not only has Perth Creative Exchange attracted resident creative people from across Scotland to the Fair City, this splendid facility is already fully let and expected to support 66 full time equivalent jobs and generate wage earnings of just under one million pounds per annum across the local economy.”

“The creative sector is now the fastest growing sector in the UK. In 2018 it added £111 billion to the economy, an increase of just under 8% from the previous year. And Perth and Kinross is a place where businesses thrive – but creative people need particular support for their talent to thrive and grow. We have around 1,500 creative industries in our area, many of which are very small scale but have huge potential to grow.”

Audrey Carlin, CEO of Wasps, said: “We have been overwhelmed by the enthusiasm that artists, makers and creative businesses have shown for the new Perth Creative Exchange, and it has been amazing to see this old school building come back to life.

“The official opening is the chance to mark what we hope will be the start of a new chapter in the story of the area’s cultural economy – and will also be the moment when we start to welcome in the general public, for what will be the first of many exhibitions.

“Perth and Kinross has an abundance of creative talent but there has been a real shortage of the high-quality, affordable studio and workspace.

“Hubs like this can help turn the tide, by providing creative people with affordable and high-quality studios and offices they need in order to build thriving businesses.”

Wasps – a national charity and social enterprise which regenerates redundant historic buildings and gives them new futures as centres of creativity – now has 20 buildings across Scotland and expects to be catering for over 1,000 tenants by the end of 2020.

In recent years it has invested in Inverness, Skye, Perth, Orkney and Nairn to deliver creative hubs in each community.

Four of the 13 business workspaces have already been taken by creative industries including Perth-based social enterprise Really Real Resources, a photography agency dedicated to portraying what life is really like for many of society’s most vulnerable, and The Malting House Design Studio, an exciting branding and design agency.

The aim is to generate a positive environment for artists and entrepreneurs who want to live and work in the area – rather than having to seek opportunities elsewhere.

The main contractors for Perth Creative Exchange were Robertson. Kevin Dickson, Managing Director, Robertson Tayside, said: “Working with hub East Central Scotland and Perth & Kinross Council, we have delivered a space which will support the creative sector both now and in the years to come. This hub will be a boost to the arts community in Perth and further afield, and everyone at Robertson is delighted to see it thriving already.”