Economic Strengths in Perth and the Wider Region

Driven by exemplary private-public partnerships, Perth and the wider region has a vibrant economy that has been built on a clear and purposeful strategy for growth. Competitive land and commercial rates, a high quality of living, a growing population and one of the country’s most well-connected locations all contribute towards the economic stability of the area.

Perth has raised its game dramatically in recent years, with £600m currently committed to projects in and around the city and wider region, with significant economic impact anticipated over the next decade.

Economically, Perth city region punches well above its weight, with an impressive regional productivity figure of £49,500 – some £2,200 per job higher than the Scottish productivity average of £47,300.

This stems, in part, from being one of the country’s highest performing regions for employment with 77% of the eligible population currently in work – 4% higher than Scotland as a whole. 80% of the population is considered to be economically active with higher than average levels of affluent achievers and comfortable communities all constant in Perth’s demographic make-up. 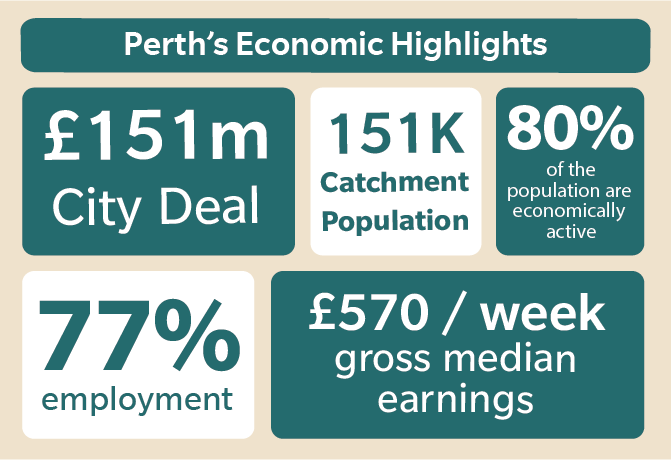 Ensuring that we mitigate, where possible, the impact of the COVID19 crisis on business remains the focus of the entire Economic Development team.

With post-Brexit enterprise now underway, we look at the new rules of engagement laid out in the UK-EU Free Trade Agreement.

Perth’s unrivalled location and infrastructure seamlessly connects the city with wider Scotland and the UK via road, rail and nearby air.