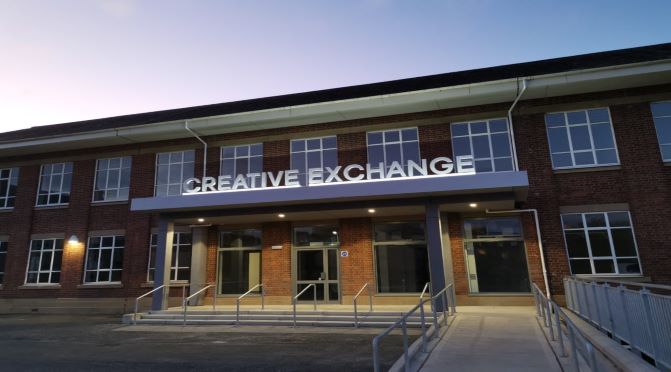 A ground-breaking project that transformed a former Perth primary school into a hub for artists and creative businesses has won a prestigious award.

Perth Creative Exchange was named Regeneration Project of the Year at the Scottish Property Awards 2021 on Thursday 25 March.

It was one of eight projects shortlisted for the award.

The £4.5 million project is a partnership between Perth & Kinross Council and Wasps Artists’ Studios that saw the former St John’s Primary School in Stormont Street, Perth, turned into high quality studios for artists and creative businesses and an innovation space for start-ups.

Perth & Kinross Council invested £3.5 million in the project, which was officially opened by Perth and Kinross Provost Dennis Melloy in February 2020.

“Not only has it brought a derelict building back into use, Perth Creative Exchange provides a real boost to our creative economy, providing affordable space for artists and makers from Perth and Kinross and across Scotland to work.”

The former school has 26 studio spaces and 13 workspaces for creative industries and cultural social enterprises, its own gallery, The Gannochy Project Space, and The Forteviot Charitable Trust community workshop/learning space. The facility also supports creative and digital business innovation within the Famous Grouse Ideas Centre supported by the contribution from Edrington, makers of the Famous Grouse whisky.

Elevator’s Business Gateway services, Culture Perth & Kinross and the University of the Highlands & Islands – Perth College, are also partners in the project’s success.

Wasps Chief Executive Officer Audrey Carlin said: “This award is testament to the collaborative partnership approach to regeneration led by Perth and Kinross Council, working closely with Wasps, alongside a range of stakeholders and funders, to successfully deliver a creative, economic legacy in the heart of Perth City Centre.

“Perth Creative Exchange is already home to a community of artists and makers who, along with creative industries, a café, meeting space, an innovation space, workshops and events space, is breathing new life into a derelict former school building.

The main contractor for the project was Robertson.